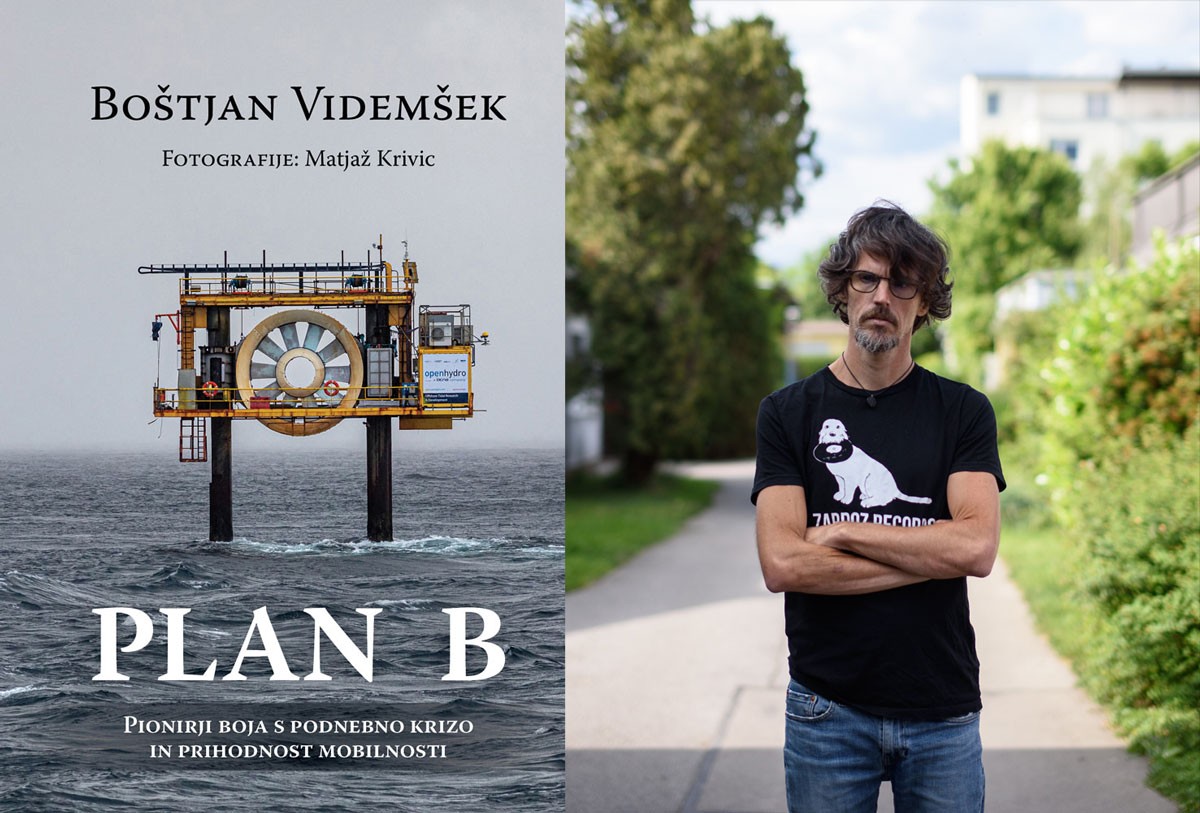 "I have spent last 25 years reporting from all major wars and conflicts around the world. The experience has been extremely valid and humble. But also deeply frustrating. Most of the wars I’ve covered, are still ongoing (Afghanistan, Iraq, Syria, DR Congo, Somalia, Darfur, …). The situation on the ground – and also in our profession – only got worse.

I’ve decided to make a career turn. A turn, not a u-turn. Together with an award-winning photographer Matjaž Krivic we decided to focus on the climate crisis. But not in reporting about polar bears and shrinking glaciers – we don’t have time for that.

Fight against the horrible consequences of human-made climate crisis is the most important, crucial frontline of humanity; of our time.

That’s why we decided to start a solution-based project. After a due diligence research, we started our long journey, looking for the best community-driven solutions around the world.

I’m trying to explain what has – and what is happening – to field-reporting based journalism and why I made a decision to change the “frontlines”. And why is it so important to have community based or grass-root projects in the fight with the climate crisis."

About the BOOK PLAN B

Part One:
Coming Clean: How Communities around the World are fighting the Climate Crisis.

Chapter One
Greece: The First 100% Self-sustainable Island in the Mediterranean

The tale of the first energy self-sufficient island in the Mediterranean is also the story of the individuals and communities who had brought an almost deserted island back to life. Among other things, Tilos was among the first part of Greece to prohibit hunting and allow same-sex marriages. At the height of the economic crisis, it saw the emergence of a highly successful solidarity movement striving to integrate the incoming refugees into the community.
When the economic crisis struck, a few of the local enthusiasts decided to harness the island’s plentiful wind and solar power and start a revolution. Aided by the European Commission and a number of European universities, their aims proved a resounding success. Today, Tilos is exporting energy to the rest of the islands. Its unique brand of hybrid solar-wind power plant with the revolutionary Battery Storage System can be ‘copy-pasted’ onto most islands, and not only in the Mediterranean.

Up until the great seventies oil crisis, Iceland was wholly dependent on (imported) oil. The small volcanic state only took to utilizing its vast geo-thermal potential when the economy crashed and left no other choice. This marked the beginning of a remarkable success story.
Today, Iceland is the biggest per capita electric-energy producer in the world. Virtually all its energy is derived from renewable sources. After the financial meltdown of 2008, the small island also managed to set up an entirely new economic paradigm, heavily focused on eco-friendly projects. Countless start-ups are sprouting all over the land, developing the next generation of renewable-energy technology.
The dramatic consequences of climate change loom exceptionally dire on this small island, given its proximity to the Arctic circle. This chapter is an homage to a society which has already embraced an altogether different future.

The CCS (Carbon Capture and Storage) system was long considered a ‘fossil-fuel technology’, seeing how it was invented by oil and gas companies to reduce the costs of production. Yet for the past several years, the CCS has been at the heart of the debate on the best methods for tackling the climate crisis.
So far, the new system was most enthusiastically embraced by the oil-rich Norway, which can well afford the development of such technologies. In this chapter we present a pilot CCS factory, built right next to Norway’s largest waste incineration plant.
The captured CO₂ is liquified and stored into special cisterns, then transported to the nearest port. From there, it travels to the abandoned oil boreholes along the Western Norwegian coast, only to be injected beneath the sea floor through the existing oil-gas infrastructure. Its final resting place? The geological caves previously used for oil drilling. One might easily say that the captured CO₂ is thus returning home. The future potential is mind-boggling.

A Swiss start-up called Climeworks recently proved something deemed impossible even five years ago. It proved that carbon dioxide can be captured directly from the air. To this end, the company’s two German co-owners collaborated with the ETH Zürich University to develop a very simple, efficient and not that expensive set of technologies.
Apart from the above-mentioned CCS, Direct Air Capture currently represents the sole realistic method of capturing hothouse gasses. For Climeworks, Iceland provided the ideal storage opportunity: the direct injection of the CO₂ into the basalt rocks of the island’s volcanic underground.
Climeworks is a fast-growing company currently also developing the production of synthetic renewable biofuels like kerosene and green hydrogen.

The Orkney Islands have long been known as Europe’s windiest corner. Surrounded by the Mediterranean Sea and the Atlantic Ocean, they are subject to some of the continent’s most forceful waves and tides. This is the main reason the EMEC (European Marine Energy Centre) selected these remote Scottish islands as its seat.
For the past decade, dozens of international companies have alighted on the Orkneys to develop different technologies for marine energy extraction. Some of these technologies are now right at the brink of serial manufacture.
To top it all off, the Orkney Islands are now producing more energy than they consume – all of it from renewable sources. The surpluses are directed into the production of green-hydrogen, which is already powering the local ferries, buses and cars. Our visit to the island offers a glimpse into the future as it should have been.

During the iron-curtain years, the small Austrian town near the Hungarian border was one of the poorest in the country. Nearly cut off from the rest of Austria, Güssing seemed to be slowly winding down … Until, at the start of the nineties, the then mayor and a local businessman set out to break the vicious circle of hopelessness.
They started collecting waste-grade wood from the nearby forests and tapping into the national and European funding programs. In a few years, Güssing was transformed into the nexus of the Austrian green revolution – steadily branching out into sustainable energy sources like biomass, biofuels and green hydrogen.
Its cheap renewable energy was part of the reason forward-looking companies from all over the world started flocking to Güssing, until the townlet became the official seat of the European Centre for Renewable Energy. On the heels of a number of understandable rises and falls, this is what it remains today.

Part Two:
The Lithium Road: The Future of Mobility

Matjaž Krivic and I tackled the story of lithium, the driving force of the 21st century, even before it became the focus of frenzied international media coverage. We set out to follow a single gram of lithium from Bolivia’s Salar de Uyuni – high up in the Andes, where anywhere up to 70 percent of the entire world reserves are located – to the electric-car factory floors in China.
The Bolivian chapter is a story of political friction, environmental devastation, the vagaries of global supply chains, the spectacular incompetence of the authorities and boundless corporate greed.

Over the course of a month, the photographer and I visited – legally and illegally – a dozen of different Chinese electric-car and lithium-battery factories.
In this totalitarian land, which resorted to the green technologies on account of its crippling pollution, we were faced with an environmental and digital dystopia, exploited by the authorities to push through a neo-colonial agenda. We plumbed the depths of the local and global lithium markets, and met up with various key figures in the Chinese electric-car industry.
China is producing and purchasing more than half of the planet’s electric vehicles. At the same time, it has pulled off the extraordinary coup of total control over the entire lithium supply chain. The developments in this dynamic field come breath-takingly fast. An irreversible monopoly is being created.

Under Donald Trump, the US opted to ‘return to its roots’ – meaning a wholesale fall-back on fossil fuels. Coal is being furiously extracted and utilized, while the oil and gas companies are making out like bandits, racking up record profits mainly on account of fracking.
Yet behind this lurid bonanza, a number of federal states like Nevada, California and North Carolina were undergoing a green transformation. Matjaž and I visited a number of US lithium mines and ongoing lithium-based projects. Our road trip culminated in our visit to the 10th Lithium Supply & Markets conference in Las Vegas, where we met with some of this exploding industry’s key players.

Norway, October 2018
Eighteen months ago marked the first time the Norwegians bought more electric cars than their gas and diesel counterparts. Furthermore, Oslo is now closed down for private traffic. On the wings of a near unanimous political consensus and the sales from its traditionally strong oil production, Norway is speedily electrifying its roads, as well as its shipping and flying industries.
We visited the shipyards, the politicians, the lithium-battery factories … Seeing with our own eyes that the Norwegian electric revolution is comprehensively powered by renewable sources (95% water).